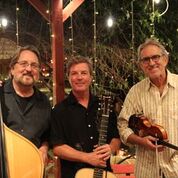 There are not many folks alive who can say they’ve actually played with the great bluegrass pioneer Bill Monroe, but Greg Morton is one of them.  A flat picking guitarist who appears to make playing completely effortless, Morton has been gracing Tucson stages ever since he moved here almost 20 years ago.  Since then, he has appeared at the Tucson Folk Festival many times.  And, if you’ve frequented La Cocina on a Friday evening, you will already have experienced Greg’s unique style and sound.

TKMA is proud to announce that the Greg & Randal Morton Band will be our Local Headliner for the 33rd annual Tucson Folk Festival  taking the stage on Sunday, May 6 at 8 p.m.  Joining the Greg Morton Band on stage will be Greg’s twin brother Randal, and bassist Jim Stanley. (Look for other stellar players to be included in his band for that night, as well!)

CLICK HERE TO LISTEN TO THE GREG MORTON BAND