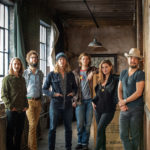 The Black Lillies are a band for the ages: rich, rootsy tunes performed with as much heart as technical virtuosity. If you ask them, they’ll tell you they play “Tennessee music” – combining strains of swampy Memphis soul and blues with Nashville’s classic country and East Tennessee’s traditional Appalachian style – while Rolling Stone describes it as “country music with a soul-rock infusion, supported by bandleader Cruz Contreras’ smart songwriting and tight musicianship.” Either way, it’s music that stirs your soul, touches your heart and makes you want to dance.

The band’s latest album, Hard to Please, was an immediate critical and radio success, hitting #1 on the Roots Music Report and #4 on the Americana radio charts as well as debuting at #12 on Billboard Heatseekers and #30 on Billboard’s Top 200 Country Albums. American Songwriter summed it up as “a soulful mix of upbeat Americana and tender ballads,” while Vanity Fair noted that “their sound continues to cross generations and musical genres – country, folk, blues and add in a touch of the Dead, for good measure.” And the bar had already been set high by their previous releases: 2013’s Runaway Freeway Blues conquered the Billboard Top 200 country charts and was selected for dozens of “Best of“ lists, catching the attention of NPR, CMT, Wall Street Journal, Guitar World, Garden & Gun and more for what Entertainment Weekly calls “strong roots-folk songwriting, sweet harmonies, and charismatic indie spirit,” while 2011’s 100 Miles of Wreckage won the Independent Music Award for Americana Album of the Year.

Their raucous live show has earned them festival slots and enthralled audiences at venues ranging from Bonnaroo, New Orleans Jazz Fest and Stagecoach to the legendary Grand Ole Opry. The music is breakneck, brazen and beautiful; sultry soul, honky-tonk heartache, winding jams and flat-out rock’n’roll, tied together with soaring harmonies that “bring back echoes of practically every great male/female duo of the past several decades … [the sound is] one for the ages, and, one suspects, ages yet to come,” according to Glide Magazine.

Make no mistake: when you see The Black Lillies live, you definitely won’t be hard to please.

CLICK HERE TO LEARN MORE ABOUT THE BLACK LILLIES 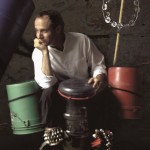 Fun for All Ages! Billy Jonas is one of those rare performers who can engage and delight both young and adult audiences.  Billy’s clear tenor voice is well-suited to a plethora of venues, from intimate settings and workshop sessions to large halls and outdoor festivals. For more than two decades, his creative and interactive performances have enchanted and inspired folks from all walks of life — touching hearts, souls, and minds world-wide. As a founding member of the acclaimed duo “The Billys,” Billy Jonas has made innovative use of “found objects.” He helps audiences discover the music within common items … and within themselves.

Billy Jonas’ recordings and live concerts across the US and Canada have generated an enthusiastic following. His CD “What Kind of Cat are You?!” received multiple awards including a First Place/Gold from AFIM (American Federation of Independent Musicians), and a Parent’s Choice Gold. Jonas’ videos have garnered critical acclaim, including Parents Choice Awards and a New York Times “Best” listing. In 2010 he was invited to present a concert at the White House!

The Concert Experience!  It’s a“neo-tribal hootenanny” —  original “voice and percussion” -based songs with a generous dose of audience partic

ipation. The music mixes conventional instruments (guitar, bass, marimba) with homemade creations (using buckets and barrels, keys and cans, bells and body percussion). Billy tailors both his song selection and its presentation to uniquely suit each audience.  It’s spirited, straightforward music that is accessible to anyone and everyone, regardless of age or cultural background. The big-tent festival quality of Billy’s music facilitates connection and community while fostering inspiration and… most importantly… FUN. 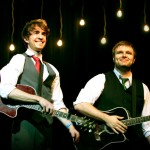 Named ‘Best Group/Duo’ in the 2014 International Acoustic Music Awards, acoustic-duo Ryanhood got their first break more than a decade ago as street-performers at Boston’s Quincy Market. It was there that they were spotted by a college booking agent and thrust into the college touring scene, where Campus Activities Magazine would name them “one of the most requested acts by college buyers all across the country.” They’ve since gone on to perform more than 800 shows in 45 U.S. states over the past decade and have shared stages with Jason Mraz, Matt Nathanson, Train, American Authors, and have even been tweeted about by Ellen DeGeneres.

Cameron Hood’s rich and folky lead vocals, Ryan Green’s explosive guitar and mandolin riffs, and their airtight vocal harmonies prompted the Arizona Daily Star to call them, “a match made in radio heaven.”

Their fifth and newest album, Start Somewhere, finds the band returning to the intimate storytelling and acoustic guitar interplay that was a hallmark of their early work as buskers. They currently reside in their hometown of Tucson, AZ, where they have won more than a dozen Tucson Music Awards including “Best Folk Band” and “Best Rock Band” (you can decide for yourself which is most accurate).