The street level entrance to the Joel D. Valdez Library is from Jácome Plaza. The plaza was constructed during the construction of the Library in 1989 on the site of the family owned and operated Jácome’s Department Store. The plaza and was officially designated Jácome Plaza in 2003.  Festival Workshops, Panel Discussions  and festival exhibits are held inside the library. 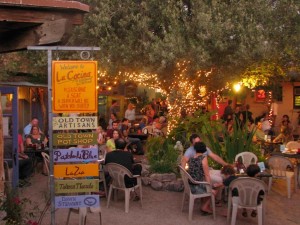 Located in the heart of the historic Presidio district of downtown Tucson and tucked inside the walls of Old Town Artisans you will find the beautiful courtyard restaurant that is La Cocina. Boasting al fresco dining, a rustic Cantina, and live music under the stars this gem certainly offers something for everyone.

Both local and national acts are featured on the outdoor stage most nights of the week. Late night music focuses on high energy acts or DJ’s that guarantee you won’t be able to keep your feet still.  Whether you are dining, drinking, or dancing La Cocina surely offers something for everyone!
La Cocina is located at 201 N. Court Avenue.

Located one block east of Old Town Artisans, the Presidio San Agustín del Tucson Museum is a re-creation of the Tucson Presidio built in 1775. Visitors travel back in time to learn about life as early Tucsonans would have lived it. Docent tours discuss life in the Santa Cruz Valley for early Native Americans, Presidio residents and Territorial Period settlers.  See the archaeological remains of a pit house, walk along the original Presidio wall and experience a 150 year old classic Sonoran Row house. Presidio San Agustin del Tucson (Presidio Museum) is located at 196 N Court Avenue.

Located between Alameda and Washington Streets

Located between Telles and Washington Streets